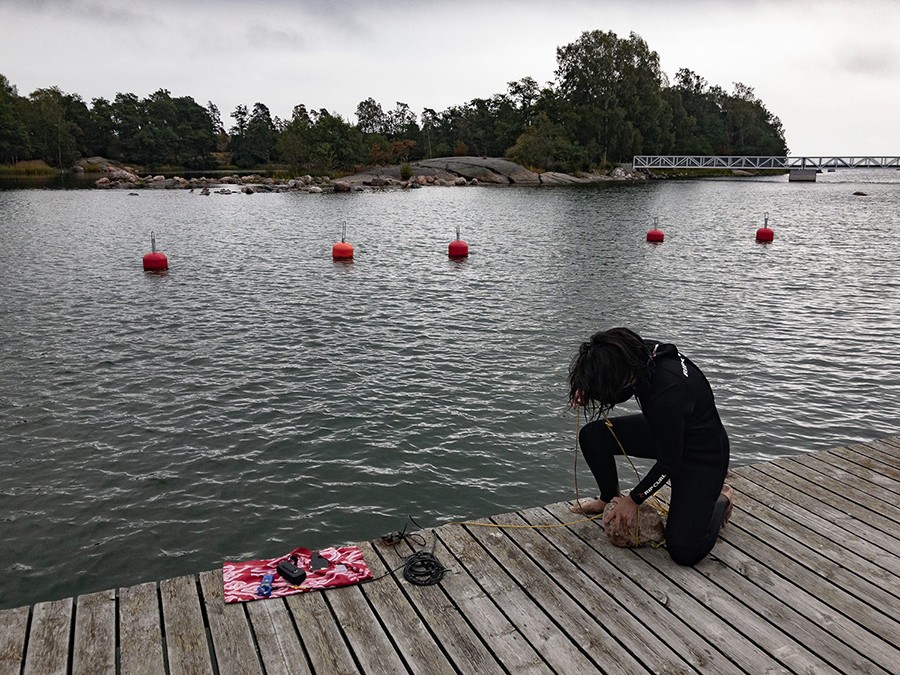 conceived and produced in the framework of 'Imagining Godzilla', a floating art research platform curated by Andy Best and Merja Puustinen, supported by Bioart Society, sailing in the Baltic Sea in August 2019.


How do we consider sound related to human capability of hearing it? We convey meaning through spoken language but the animal world demonstrates that communication through sound can happen also at frequencies that the human ear cannot perceive. This especially happens through underwater communication of mammals such as whales, who can have conversations at very long distances between each other. But language also communicates through tone and musical parameters other than meaning.

Communication through poetry adds another level of intellegibility to this picture: poets are not simply composers of verses. Managing personal relationships with the complex subject of intuition, they are also 'seers' of truths and realities that are not immediately perceivable. In this sense, verses can be seen as rythms that are 'heard' with an inner ear, vibrating from a place that cannot be clearly seen or scientifically described. Some poets call this place “impersonal knowledge”.

U.G. is an experiment of sound poetry that can be related to the experimental writing practices of XX century avant-garde movements such as dada and futurism, among the others. It's a voyage whose destination can be found between pure sound and meaning, a place whose perimeter is blurred by definition but has been widely inhabited in European literature (for example with madrigale in Italian middle-age times) and, in general, in folk oral poetry at multiple latitudes and longitudes, when onomatopeia is employed.

Underwater Godzilla has been written following a scheme of underwater sound propagation: many fish emit pulses of sounds and listen for echoes in order to orientate themselves in the 3D space. The first recorded use of the technique was by Leonardo da Vinci in 1490, when he used a tube inserted into the water to detect vessels by ear. This mechanism, that can also be compared to an idea of 'mirroring', is the grid in which the poetry text has been written. This same mirroring idea can be visually seen as a 'simmetry' concept, since the poetry text uses simmetry in sentence building through the rethoric figure of palindrome, applied not to a single word but to a sentence.

In Undewater Godzilla language spoken in the liquid dimension is plastically modified and sculptured by water in a way that makes it non comprehensible; it is the result of an aesthetic attempt of conveying meaning through a medium (water) that is inhabited by human beings only through machines and self-protecting devices. In the anthropocene time we're living in, this experiment underlines our limitations as animals living on the earth surface. It also activates the hilarious side of trying to do something not fitting to a certain context, as it is in the most successful comedies.

At the same time, the intention with which these verses are written and pronounced underwater remain intact and somehow the words are trustful messengers that do not fail in their mission of communication.


U.G. is possible because of contemporary technology, that provides adequate devices to record and reproduce sound underwater.